This one’s either attrocious reporting, bad typesetting or both.

On Monday last, Gee was committed take his trial for stealing a blanket, belonging to Mr Hill, of Wrenthorpe, near Wakefield. Last week, Gee’s period of confinement in Wakefield House of Correction for offence, expired, and on his road to Bradford, he contrived strip a hedge of the blanket in question. He was seen to come into Bradford with something suspicious tied up bundle, and was seized Charles Ingham, police officer, and the bundle searched, when it was found to contain a wet blanket, and after some inquiries the owner was found, and identified it by several marks. 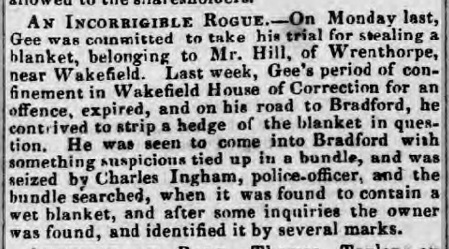 History of Wrenthorpe near Wakefield, Yorkshire, as found in old newspapers at the British Newspaper Archive.